Mary-Jane Jeanes, the Liberal Democrat councillor for West Barnes, has strongly backed calls to stop the eviction of tenants from Raynesfield in Raynes Park. 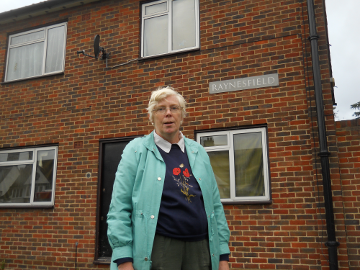 Speaking in favour of a motion at the Council meeting on 19th November, which urged the Mayor of London, Boris Johnson, to halt the evictions, Mary-Jane spoke of the "... Mayor's obligations to house Londoners."

Noting the shortage of affordable homes across London, in spite of the large budget available to the Mayor for new affordable developments, Mary-Jane criticised the decision "... to remove flats from the already insufficient stock of social and affordable housing.

"Selling off 30 Griffiths Road and the 28 flats in Raynesfield, not to mention estates in other boroughs, is just plain wrong. Ideally, Raynesfield should remain as social housing. Merton needs it; London needs it."

The Mayor's Office for Police and Crime (MOPAC) has been selling off residential properties across London, with tenants at Raynesfield at Raynes Park served with eviction notices. The families at 30 Griffiths Road in South Wimbledon have already been forced out of their homes.

The motion drew attention to the fact that these tenants - mainly key workers such as nurses, teaching and school support staff, and care workers - have lived in these properties for up to 20 years. "With average house prices and private rents in the area well beyond what their incomes could afford," it stated, "they will have to uproot their families, leaving their jobs and removing their children from their schools. They have had no assistance from the Mayor of London in finding new homes in the area."

Given the obstinancy of MOPAC, Mary-Jane argued that "... if [they] insist on selling, then the sale should be delayed, until all the tenants have moved into secure tenancies in the neighbourhood at suitable rents.  This must include finding permanent accommodation for those who have already moved in with friends or relatives, rather than face homelessness and hostel accommodation."

With Mary-Jane's support, the motion passed. Regrettably, however, the two Conservative councillors for West Barnes failed to vote for it.

Please sign the petition calling for an end to the evictions by clicking here.