We need transparency on "rubbish figures"

Deputy leader of Merton Lib Dem councillors, Cllr Carl Quilliam has hit out at the decision not to publish figures on the weekly performance of the Council’s waste contractor, Veolia, on collecting refuse and cleaning our streets.

“We can all see what a poor job Veolia are doing in keeping our streets clean and collecting rubbish and recycling. The Council’s own figures show exactly how bad their performance is.

“But for some reason councillors aren’t allowed to share these figures with residents. Perhaps Labour are worried it makes them look like they’re failing to hold Veolia to account?

“We have written to Labour Council bosses and the Council’s Chief Executive asking them to make the figures public – and importantly to reveal how much money they’ve managed to claw back from Veolia because of poor performance. If that doesn’t happen soon, we will take this to the next full Council meeting”.

Residents should not use the new bins until the new collection service begins on 1st October.

The new bin collection days from 1st October are shown on the right.

Residents who do not have room to store the wheelie bins should contact Merton council to discuss alternative arrangements (also on 020 8274 4902). You can read more about the changes here.

You can read more about our thoughts on the plan to explain the move and distribute wheelie bins here.

Councillors have had a first look at plans to explain the move to wheelie bins to residents.

By 1st October, every household will have 2 wheelie bins (one for rubbish, one for paper) plus a box for other recycling, and a food waste caddy. And either a wheelie or bag for garden waste if you pay to be in the scheme. Batteries and textiles will also be collected.

At the Sustainable Communities Scrutiny Panel on 21 June, it was confirmed by contractor Veolia that the wheelie bins will be taken one week with recycling boxes the next. Food waste will be collected weekly as will batteries and textiles.

Around 75% of households will also see a change in collection day.

Whilst Merton’s litter problem is getting worse, residents are concerned about plans to bring in fortnightly waste collection.

The local Lib Dem team have been calling for the Council to commit to maintaining a weekly collection for hygiene waste such as nappies. At the last council meeting, local parent John Tippett Cooper asked them to look into such a scheme, but Labour Council bosses refused. They insisted that there were no issues with things like nappies being collected fortnightly.

After the meeting, John said “The Council’s response on this issue shows how out of touch they are. They need to start listening to residents instead of pushing forward with their plans without proper consultation.”

Everyone knows that Merton Council is failing to keep the streets clean.

Since April, a new company - Veolia - has been responsible for cleaning our streets and collecting our rubbish.

Recent figures obtained by the local Lib Dems have revealed a shocking complacency. 4,792 instances of flytipping were reported to Labour Council bosses between January and September 2017, and yet only 18 fines were issued.

Agreed street cleaning standards are not being met and no one is holding Veolia to account.

Even worse, from late next year, Veolia will be in charge of collecting our recycling one week, and our normal waste the next, with each household forced to take two wheelie bins.

“We don’t like the contract with Veolia: Labour are clearly rubbish on rubbish. But we should use it to force Veolia to improve their service, reduce litter across the borough AND give people flexibility over their rubbish collections.”

New research confirms that a number schools in Merton are less than 150m away from roads with dangerously high levels of pollution. 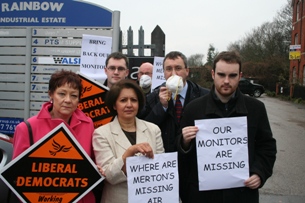 Children’s health could be seriously affected, according to the research by ClientEarth – an environmental charity that successfully brought a legal action against the Government for breaking clean air laws.

Studies have shown that the health of children living within 150m of illegally polluted roads can be affected by traffic-related air pollution.

“Cutting air pollution isn’t just an environmental issue: it’s vital for people’s health. Even more worrying is that this research only looked at schools – I have a toddler – there are numerous nurseries, playschools and playgrounds near these roads too.”