Pubs in urgent “Keep the lights on” protest at 10pm curfew 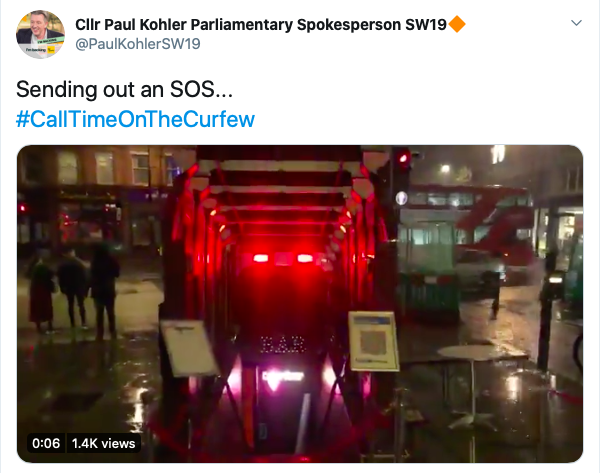 Ahead of a crunch vote in the House of Commons next week, the Liberal Democrats have teamed up with pubs, restaurants and community clubs across the country to launch a “Keep the lights on” campaign in protest at the 10pm curfew.

Liberal Democrat Parliamentary spokesperson, Cllr Paul Kohler said:
"As a small business owner I know first hand the disastrous impact that the curfew is having on responsible hospitality venues in Wimbledon and across London.
"The government has not provided any evidence that the curfew is good for public health, and nor have they provided any financial assistance to support businesses that have been affected.

"It is time for Ministers to either come forward with the evidence, or rethink the curfew. Stephen Hammond should stand up for local pubs and refuse to back Boris Johnson’s curfew.”

Venues across the country, including Cllr Kohler's bar, flashed their lights in an 'SOS' Morse Code pattern in the minutes after the enforced shutdown on Friday and Saturday. The campaign is supported by both the Campaign for Real Ale and the Night Time Industry Association.

The Liberal Democrats want to see a return to staggered leaving times instead of a 10pm closure that has seen mass crowds on the streets and public transport.

With rates on the rise in some parts of the country, Liberal Democrats are also calling on the Government to guarantee that furlough remains available to businesses that are put into lockdown while not penalising those that can open with the arbitrary 10pm curfew.

Deputy Leader of the Liberal Democrats Daisy Cooper, who launched the campaign, said:

“Scenes of pub-goers getting kicked out onto the streets and onto public transport in large groups at 10pm has shown that the curfew is bad for public health and bad for business.

“Of course we need to do everything we can to keep people safe, and hospitality venues have gone the extra mile in making their venues covid-secure. However, the 10pm curfew sticks out like a sore-thumb.

“If the Government puts pubs and restaurants into lockdown in some parts of the country to tackle the virus then it must first guarantee support such as furlough and grants, but those that can remain open should not be penalised with the arbitrary 10pm curfew.”