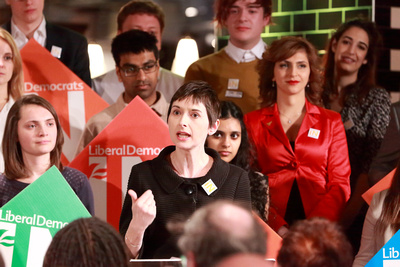 AFTER visiting Wimbledon and Raynes Park stations on Friday 19th February, Liberal Democrat Mayoral candidate Caroline Pidgeon has called for a review of the impact Crossrail 2 will have on Wimbledon, Raynes Park and Motspur Park, including looking at other build options and using international expertise.

The review would be conducted by a panel independent of Transport for London. The panel would be would be made up of representatives from residents’ groups, businesses and Merton Council, advised by international transport consultants.

“There are serious issues in Wimbledon, Raynes Park and Motspur Park about the effect Crossrail 2 works would have on the area. Residents have been presented with only one option for Wimbledon town centre, and no effort has been made to show if or why alternatives wouldn't work.

“There has been no real engagement and many residents groups feel ignored. There are also no plans for maintaining and improving existing stations in the interim like Raynes Park and Motspur Park, which are not currently accessible for many local people and could remain that way for more than 15 years until Crossrail 2 is built.

“Local people deserve better. An independent panel can listen to all views and make recommendations on the way forward. It will be high on my priority list after the elections in May.”