The Liberal Democrat candidate for London Mayor and the London Assembly, Caroline Pidgeon, has set out plans for half price fares for journeys that start by 7:30am.

The move would help London's lowest-paid workers, who are more likely to work on early shifts and are disproportionately affected by rising transport costs, as well as helping to reduce overcrowding at other times. The idea builds on earlier work around a "one hour bus ticket" – first put forward by the Party in 2008 – which allows you to change buses as many times as you need within an hour while only paying a single fare of £1.50.​

Liberal Democrat analysis of TfL’s own figures shows that offering a half price fare will cost around £30 million per year. In the first two years of a Mayoral term this can be met by withdrawing the financial support TfL is giving to the Garden Bridge project, alongside other savings identified in TfL’s budget.

The policy was launched on 6th January with information handed out at stations across London, including at Wimbledon, as was as a petition in support of the idea: http://www.londonlibdems.org.uk/halffares 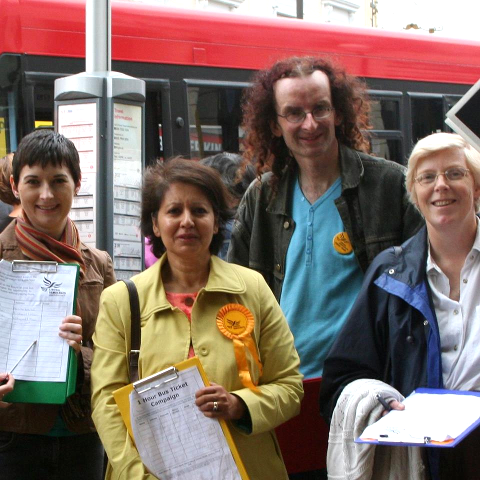 “Half price fares on TfL’s Tube and rail services would really help some of London’s lowest paid workers who often have to work unsocial hours. This is a genuine fare cut that can be delivered immediately.

“Half price fares by half seven would also help tackle overcrowding by encouraging people to start their journeys earlier in the morning. Supporting those Londoners who get up early and make our city work is really important, providing real help with the cost of living in the capital. This is a win-win policy for Londoners”.

"London's Liberal Democrats have a long tradition of promoting straightforward, liberal ideas that would make a big difference. This is modest, targeted help, that can be achieved by the Mayor. Being able to move easily and cheaply helps keep London working, as well as stopping people from being 'priced out' from working in parts of London. Encouraging people to travel earlier might also reduce overcrowding at peak times - as a commuter this appeals to me too."