As 2021 draws to a close we'd like to highlight the hard work, action, successes and achievements Merton Lib Dems have made over the last 12 months.

Liberal Democrats will always be working hard for you, representing our community and being your true local champions.

Saving Wimbledon Police Station. Keeping up the pressure on the Government and the Mayor of London. See here and look back at the many years of action. Whilst Cllr Paul Kohler's court case forced the Mayor of London to reverse his initial decision, the reality is that we’ve only guaranteed Wimbledon police station's future until 2022 and we need to keep fighting. And earlier this year, we organised a special debate on violence against women and girls, securing cross-party backing for a special task group to look at new ways for women to share their experiences confidentially, and to feed into local community policing and priorities around safety.

Fighting to stop railway cuts. South Western Railway propose to cut services to many stations in our Borough, including Motspur Park, Raynes Park and Wimbledon. At a time when we should be encouraging more people onto the railways, we’re appalled by the Department of Transport’s insistence on reducing services as a cost cut. Our petition was very successful. Liberal Democrat Assembly member and Merton Councillor Hina Bokhari also raised the issue at the London Assembly. 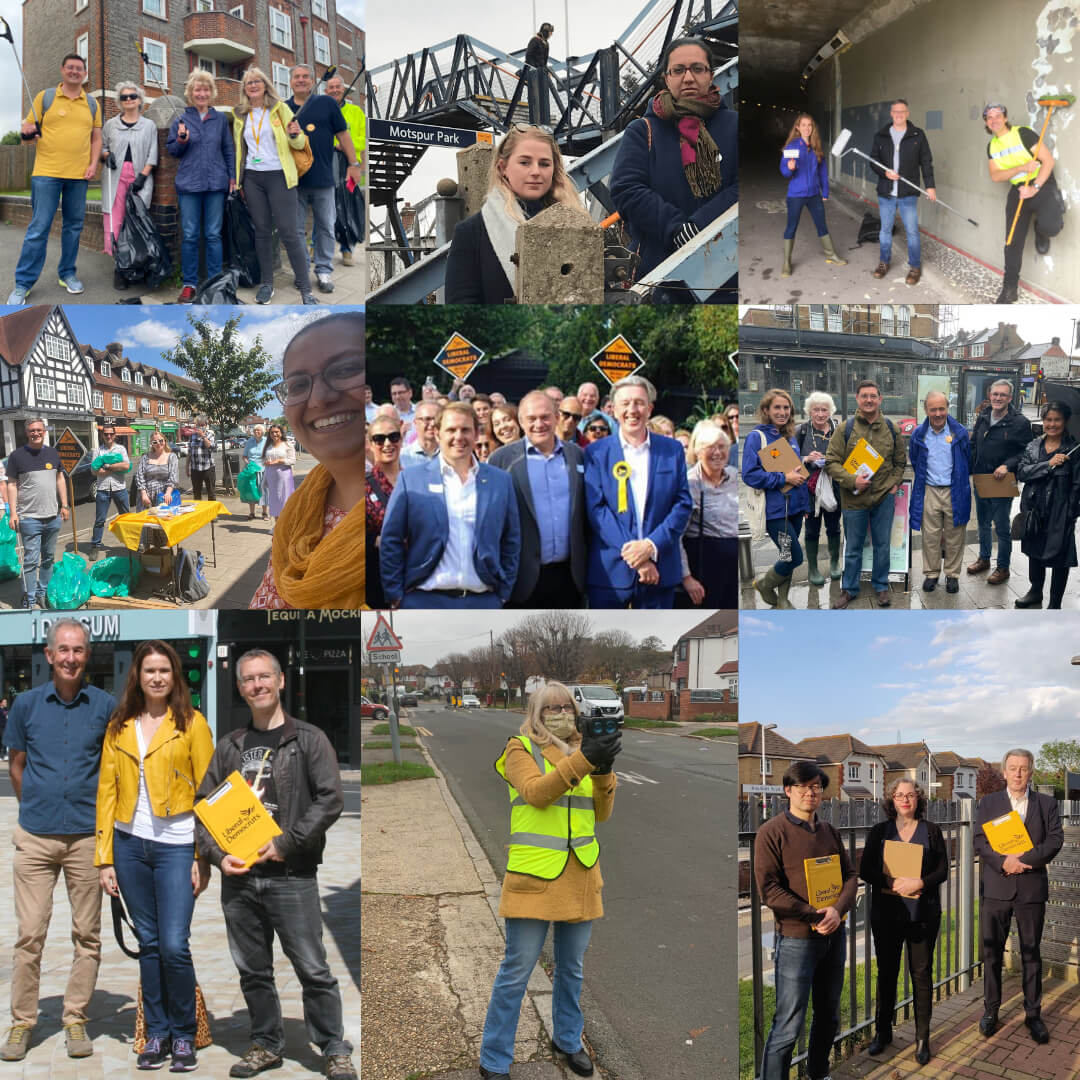 Protecting our local Heritage. Local Lib Dems in Wimbledon Chase ran a successful petition to restore the newly discovered mosaic signage at the Wimbledon Chase Co-op was run by the local Liberal Democrats in Merton. Our local heritage is important. Together we've helped saved a piece of local heritage and created an opportunity to enhance a local shopping parade.

Save Wimbledon Park! It’s not acceptable that AELTC have pressed ahead with their plans to build a new 8000 seater stadium and numerous other buildings, despite significant public opposition. The plans will mean the cutting down of nearly 300 mature trees! They are breaking promises they made when they acquired the land that they would never build on Wimbledon Park.  We're fighting to make sure the Council fulfils its duties and stands up for residents - asking them to enforce the legally binding promises. We will be submitting our petition to the Council in early February.

Honouring our local Suffragette History. Wimbledon's Dorset Hall was the home of leading suffragette Rose Lamartine Yates (1875-1954) and, as a safe house & refuge, holds an important place in the history of women's suffrage. Unfortunately its current owners, Clarion Housing Association allowed this important Grade II listed building to fall into disrepair. We supported The Dorset Hall Group raise public awareness of the situation and our petition successfully put pressure on Clarion who have now committed to undertake the necessary works. In 2022 we will continue to ensure they follow through on their commitments.

Demanding better Electric Vehicle Charging infrastructure. Merton Council lack any plan on how to increase numbers of 'on-street' charging points for electric vehicles, or to support residents who have off-street parking. We think Council bosses need to show some leadership and put a plan in place - we can't just wait for the Government to do something. Developing a plan would also create the opportunity for innovative thinking and making sure all parts of the borough are covered. Our petition now has more than 1000 signatures - but it's not too late for your friends and family to sign.  We'll be lodging it with the Council soon to push them into a response.

Make the Chase safe! After an incident in Summer 2021, we collected and submitted a petition calling for the Chase footpath and cycle lane to be made safer for pedestrians and cyclists. The Council have agreed to put up some more signs, as well as 2 'flashers' on the lamp posts and that they would cut some trees back to make the visibility of the signs clearer. This hasn't happened yet - Cllr Anthony Fairclough will keep on it until this get addressed!
Tackling the Climate Emergency. Merton Council is refusing to divest its pension fund of investments in fossil fuel companies. Our council group bought a motion to Council which the Labour group voted down. We feel that both the Government and the local Council are letting us down when it comes to the climate emergency. Our proposal was that the Council take practical steps on how it invests its pension funds. It's both sensible and achievable.

Standing up for those affected by the Cladding scandal. Our council group successfully took a motion to Merton Council in support of End Our Cladding Scandal. Cllr Hina Bokhari AM made a moving speech. The motion passed with support from Labour. Sadly local Tories failed to support it. The Government’s inadequate response to the Grenfell tragedy continues. There are still many residential buildings being discovered with unsafe cladding and residents find themselves trapped in unsafe homes with spiralling costs.

Supporting renters. In summer terrible stories of disrepair in Clarion housing association properties broke in the national media. Labour Council bosses have buried their heads over their responsibility to support tenants in all types of properties, housing association or private. This year we convinced the Council to set up a new tenants' champion service to give local renters more information and support. We are pushing them to establish it properly!

Tackling problems caused by speeding. Speeding by HGVs and other vehicles, especially on local roads is a problem often raised by residents across our Borough. Cllr Paul Kohler working with the council's officers and local transport companies tackled the problem with HGVs - read more here. Meanwhile ward teams worked closely with our amazing local community support teams from MPS Merton to hold 'speed watches' with members of the community, notably on Springfield Ave and Hillcross Ave in Cannon Hill and in the West Barnes/Motspur Park area. We continue to listen to residents' concerns and work with partners to tackle the issue. If you'd like to let us know about speeding in your area and what options you'd support to tackle it, you can do so here.

Battling for residents affected by flooding. Flooding has become a serious concern for thousands of residents in Merton as the effects of the Climate Emergency become all too apparent in our area. The problem cannot be ignored or down-played any longer! We challenged Council bosses to meet with Thames Water to agree a joint approach to the scope out its work which highlighted problem areas like Raynes Park under the rail bridge and Abbott Avenue as well as problems with storm drains in West Barnes Lane and gullies on Marina Ave. We also shared information with people (emails and local leaflets) on how to report problem areas to Thames Water effectively (see https://thameswater.co.uk/help/emergencies/flooding) and how to get the Council to clear local drains. We launched a petition calling on Thames, Merton Council and the Environment Agency to work together to solve the issues urgently.

Achieving Step-Free Access with Motspur Park with more to come! There's been a long fight to get action on improvements for local stations by residents and local Liberal Democrat Focus teams and councillors. In late 2018, local Lib Dem councillors encouraged the train company SWR to apply for for Govt funding to make Motspur Park and Raynes Park stations 'step free' - supported by a petition. They also secured agreement from Merton Council to look at a financial contribution. Sadly, the Government rejected the applications, despite the huge numbers of passengers at Raynes Park Station. Former Conservative councillors in the area had given up the fight with regards to Motspur Park, publicly saying on their social media that nothing could be done to improve the station unless Crossrail 2 went ahead. But in a victory for local campaigners, after years of public pressure, a package of funding was announced in 2021 to improve accessibility at Motspur Park station. Detailed design work should be completed in November 2022.

With regards to Raynes Park, the campaign continues.

A planning application at Wimbledon Chase Station - a complete redevelopment of the station brought a potential opportunity to improve matters. The developers were reluctant but we will be pushing the Council to insist on this as plans move forward.

At Haydons Road Station, following the launch of our petition in 2021, our local Focus team met with a Govia Thameslink representative in October. They promised to produce a plan setting out the changes needed to make both platforms 'step free'. They would then seek to obtain funding with a view to completing the necessary works next year. However, the Council will also need to agree the (albeit minimal) work required at 1 Caxton Road before the project can be given the go ahead. However, Labour Council bosses are currently too busy blaming the train company for the delay rather than just getting on with it.